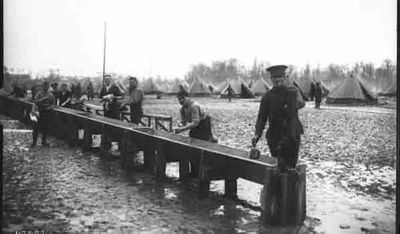 This crossroads, almost deserted today, was the site of the camp occupied by the 2nd Irish Guards during the First World War. It was from here that they left for the front. Rudyard Kipling described the camp. After the battle, the 2nd Irish Guards were relieved during the night of 6/7 August. However, they were back here again on 16 August, to return to the front line, which had scarcely moved. Camps - also for French and Belgian troops - were located here throughout the war, because of the proximity of the Ieper-Calais railway. There was also a large British supply depot. Two bunkers (Wippe 7 and Wippe 8) were made by Belgian soldiers using British materials.
When you drive further to Canada Farm, you will see the reason why this region was fought over so heavily: the hills visible in the distance were of great strategic importance.