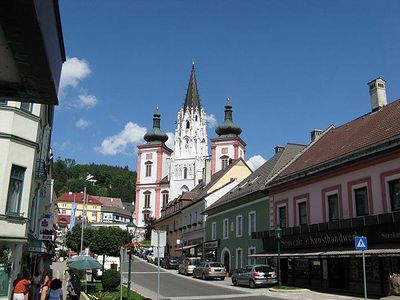 Mariazell is an Austrian city located in the southeastern state of Styria. Well known for being a hub of winter sports, 143 kilometres north of Graz. It is picturesquely situated in the valley of the Salza, amid the north Styrian Alps.

It is a site of pilgrimage for Catholics from Austria and neighboring countries. The object of veneration is an image of the Virgin Mary reputed to work miracles, carved in lime-tree wood. This was brought to the place in 1157, and is now enshrined in a chapel adorned with objects of silver and other costly materials. The large church of which the chapel forms part was erected in 1644 as an expansion of a smaller church built by Louis I, King of Hungary, after a victory over the Ottoman Empire in 1363.