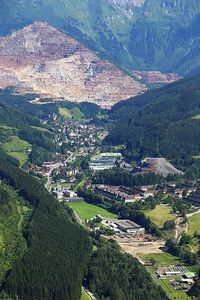 Eisenerz is a market place and old mining town in the Austrian state of Styria, 68 mi . N.W. of Graz by rail. Pop. 6,400. It is situated in the deep Erzbach Valley, dominated on the east by the Pfaffenstein 1871m, , on the west by the Kaiserschild 2084 m , and on the south by the Erzberg 1465 m . It has a medieval fortified church, a Gothic edifice founded by Rudolph of Habsburg in the 13th century and rebuilt in the 16th century.
At the turn of the past century the Erzberg furnished such rich ore that it was quarried in the open air like stone, in the summer months. There is documentary evidence of the mines having been worked as far back as the 12th century. They afforded employment to two or three thousand hands in summer and about half as many in winter, and yielded some 800,000 tons of iron per annum. During World War II, a subcamp of Mauthausen concentration camp was located here. It provided slave labour for local industry. Eisenerz was connected with the mines by the Erzberg Railway, a bold piece of engineering work, fourteen miles long, constructed on the Abt's rack-and-pinion system. It passed through the pastoral scenery, before descending to Vordernberg, a center of the iron trade situated on the south side of the Erzberg. Eisenerz then possessed, in addition, twenty-five furnaces, which produce iron, and particularly steel, of high quality. Today the Erzberg is home to motocross races.