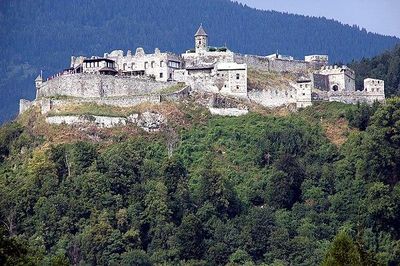 Landskron Castle is a medieval hill castle northeast of Villach in the state of Carinthia, Austria. Dating to the early 14th century, the castle ruins are located on a rock cone of the Ossiach Tauern range, at an elevation of 658 metres above sea level. Today Landskron Castle, its falconry centre conducting regular flying demonstrations, and the nearby macaque enclosure are major tourist destinations.

Settled since the Hallstatt era, the estates around Lake Ossiach were first mentioned in an 878 deed issued by the East Frankish king Carloman of Bavaria, who granted them to the monastery of Altötting he had established shortly before. About 1024 the area was among the Carinthian possessions of one Count Ozi of the Chiemgau, probably a scion of the Otakar dynasty, who founded Ossiach Abbey nearby. A castle already existed, when in 1330 the estates were acquired by the Counts of Ortenburg.