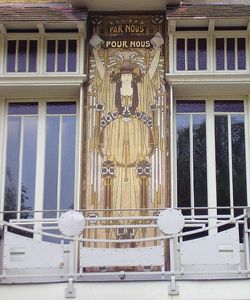 The Cauchie House was built in 1905 by Art Nouveau architect, painter, and designer Paul Cauchie, in Etterbeek, Brussels , next to the Cinquantenaire Park. Its facade is remarkable for its allegorical sgraffiti.

Paul Cauchie was sixteen when he began his architectural studies at the Antwerp Royal Academy of Fine Arts . Very soon afterwards, he enrolled at the Académie Royale des Beaux-Arts , where he studied painting and the sgraffito technique, and followed courses in decorative painting . From 1895, whilst still pursuing his studies, Cauchie started to work for a living. Apart from his own house, only three houses built by Cauchie are known: two others in Brussels and one at Duinbergen. As Cauchie was more of a decorator than an architect, he specialised in designing sgraffiti for architecture.