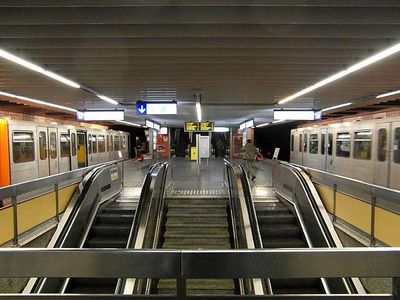 Simonis and Elisabeth are two interconnected stations on the Brussels Metro serving line 2 and line 6 on two different levels. Additionally Simonis is a railway station operated by NMBS/SNCB and a tram stop. The station complex is situated at the end of Boulevard Léopold II and is close to the Basilica of the Sacred Heart. Simonis was named after Place Eugène Simonis/Eugène Simonisplein, which in turn is named after the Belgian sculptor Eugène Simonis; while the nearby Elisabeth Park, named after Elisabeth of Bavaria, Queen of Belgium, gives Elisabeth its name.