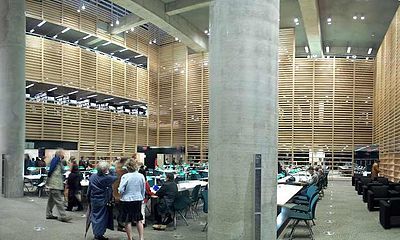 Bibliothèque et Archives nationales du Québec is a Québec governmental organization who manages the legal deposit and national archives systems of the province as well as its national library, which is located in the Grande Bibliothèque in Montreal. It is born out of a merger between the Bibliothèque nationale du Québec and the Archives nationales du Québec, in 2006. The Bibliothèque nationale du Québec had previously merged with the Grande bibliothèque du Québec in 2002.
BAnQ's mandate is to offer democratic access to culture and knowledge. To this end, it brings together, preserves and promotes Québec's and Québec-related heritage materials, and also provides the services of a major public library. BAnQ carries out its mandate in 12 facilities which are open to the public: the Grande Bibliothèque, BAnQ Vieux-Montréal and BAnQ Rosemont–La Petite-Patrie in Montréal; BAnQ Gaspé, BAnQ Gatineau, BAnQ Québec, BAnQ Rimouski, BAnQ Rouyn-Noranda, BAnQ Saguenay, BAnQ Sept-Îles, BAnQ Sherbrooke and BAnQ Trois-Rivières.