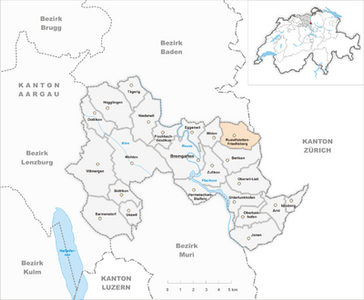 Rudolfstetten-Friedlisberg is a municipality in the district of Bremgarten in the canton of Aargau in Switzerland. Prior to 1953, the municipality was officially known simply as Rudolfstetten.
Rudolfstetten-Friedlisberg is first mentioned in 1190 as Rudolfstetin in a deed to the Benedictine Engelberg Abbey. In addition to Engelberg, Wettingen, Gnadenthal and St. Blasien Abbeys also owned property in the village. The village vogtei or bailiwick was an originally a Habsburg fief, though in the 14th Century it transferred to the Schwendauer in Zurich. Then, in 1438 it went to Bremgarten.