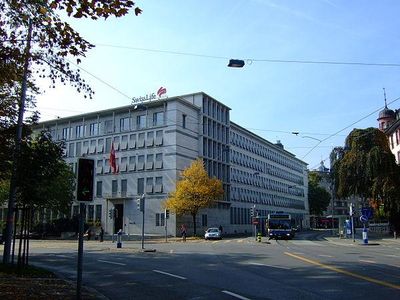 The Swiss Life Group is the largest life insurance company of Switzerland and one of Europe’s leading comprehensive life and pensions and financial solutions providers, with approximately CHF 232.6 bn of assets under management. Founded in 1867 in Zurich as the Schweizerische Lebensversicherungs und Rentenanstalt cooperative, the company entered the Swiss stock market in 1997 and adopted its current name in 2002. In 2018 the group declared a premium income of CHF 19.2 bn, a 4% increase over the previous year. Net profit increased by 7% to CHF 1080 million. Swiss Life is one of the twenty companies listed under the Swiss Market Index, as SLHN.
Conrad Widmer established the Schweizerische Rentenanstalt in 1857 as the first life insurance company in Switzerland, backed by guarantees from Schweizerische Kreditanstalt. Prominent Zurich politician Alfred Escher was integrally involved in the development of the cooperative, whose goal was to provide Swiss families with a sufficiently solid foundation by providing insurance against the uncertainties of life: the company's Board included representatives of most Swiss Cantons. In 1866, Widmer obtains a license in Prussia, and a year later, the annuity establishment had business operations in Hamburg and Bremen. Beginning in 1894, the establishment was one of the first insurance institutions to offer occupational insurance. Between 1866 and 1987, Rentenanstalt expanded to Germany, France, the Netherlands, Belgium, the United Kingdom, Spain, Luxembourg, and Italy. In 1988 it took over La Suisse insurance company in Lausanne.