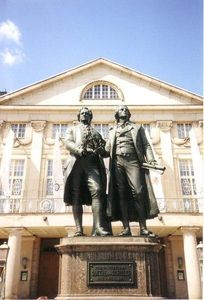 The Deutsche Nationaltheater and Staatskapelle Weimar is a German theatre and musical organisation based in Weimar. It is a twin institution, consisting of the theatrical Deutsches Nationaltheater and the symphony orchestra known as the Staatskapelle Weimar. It has a total of six stages across the city and also hosts touring orchestras and theatre companies, as well as making appearances in electronic media.

The precursor ensemble of Staatskapelle Weimar dates from 1482, with the formation of a musical ensemble in service of the Weimar Fürsten . In 1602, the ensemble attained resident status at the Weimar court, as the Herzoglichen Hofkapelle . Notable musicians in the early history of the Staatskapelle Weimar included Johann Schein and Johann Sebastian Bach , both of whom went on to the St. Thomas Church, Leipzig. Bach particularly worked as resident organist and Kapellmeister.