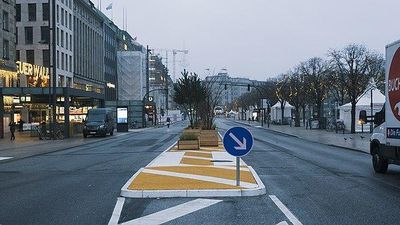 Jungfernstieg mostly lies within the quarter of Neustadt; however at its easternmost it stretches as far as Hamburg-Altstadt. In total the Jungfernstieg stretches some 600 m along the southern and south-western shores of the Binnenalster lake and continues further to Gänsemarkt. On the lakeside it is framed by Ballindamm to the east and Neuer Jungfernstieg to the west. Towards the built-up area Jungfernstieg intersects with a number of streets - in the Altstadt with Bergstraße, Plan and Reesendamm; the latter carries on along the shore of Kleine Alster towards Rathausmarkt. At Reesendammbrücke, Jungfernstieg crosses the Alster into Neustadt. It goes past Neuer Wall and Große Bleichen, two of Hamburg's leading shopping precincts. At the intersection with Neuer Jungfernstieg, Jungfernstieg forms a Y-junction with Colonnaden, another shopping street.

The entire circumference of the lakeside is occupied by a terrace. Two pavilions are located on the terrace: the Alsterpavillion , and a smaller pavilion, which functions as the entrance to the rapid transit station. The lakeside is also a hub for Hamburg's Alster ferries.