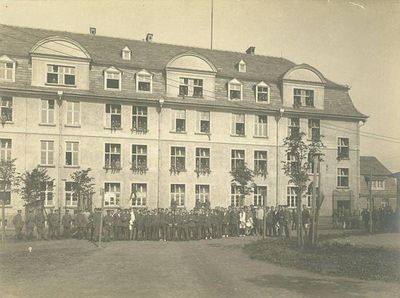 Holzminden prisoner-of-war camp was a World War I prisoner-of-war camp for British and British Empire officers located in Holzminden, Lower Saxony, Germany. It opened in September 1917, and closed with the final repatriation of prisoners in December 1918. It is remembered as the location of the largest PoW escape of the war, in July 1918: 29 officers escaped through a tunnel, of whom ten evaded subsequent recapture and managed to make their way back to Britain.
The prisoner-of-war camp is not to be confused with Holzminden internment camp, a much larger pair of camps located on the outskirts of the town, in which up to 10,000 civilian internees were held. The internees mainly comprised Polish, Russian, Belgian and French nationals, as well as a small number of Britons.