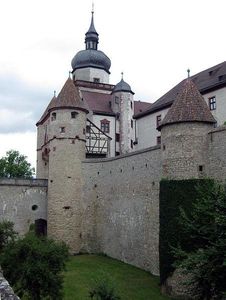 Marienberg Fortress is a prominent landmark on the left bank of the Main river in Würzburg, in the Franconia region of Bavaria, Germany. The mighty Fortress Marienberg is a symbol of Würzburg and served as a home of the local prince-bishops for nearly five centuries. It has been a fort since ancient times. Most of the current structures originally were built in Renaissance and Baroque styles between the 16th and 18th centuries. After Gustavus Adolphus of Sweden conquered the area in 1631 during the Thirty Years' War, the castle was reconstructed as a Baroque residence. After it ceased to serve as residence of the Bishops of Würzburg, the fortress saw repeated action in the wars of the late 18th and 19th centuries. Festung Marienberg was severely damaged by British bombs in March 1945 and only fully rebuilt in 1990. Today, it houses two museums.
The fortress is located on a prominent spur of the 266 metre high Marienberg which rises about 100 metres over the Main river on the opposite side of the city of Würzburg. On the slopes around the castle are vineyards.