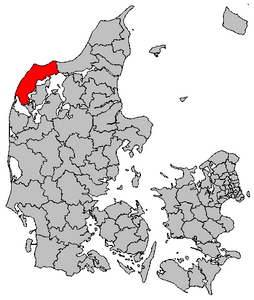 Thisted municipality is a municipality in North Jutland Region, Denmark. The municipality covers an area of 1,072 km², and has a total population of 45,549 . Its mayor is Erik Hove Olesen, a member of the Social Democrats . The main town and the site of its municipal council is the town of Thisted.