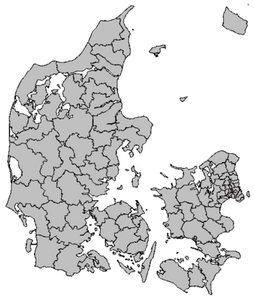 Rødovre Kommune is a municipality in Region Hovedstaden on the island of Zealand in eastern Denmark. Its mayor is Britt Jensen. She is a member of the Social Democrats political party who hold a majority of seats in the council.

The municipality was created in 1901 when the parish of Rødovre was split from Brønshøj-Rødovre parish; the Brønshøj part was simultaneously annexed by the city of Copenhagen.
The municipality reforms of 1970 and of 2007 both left the boundaries of Rødovre unchanged.
Erik Nielsen was replaced by Britt Jensen as mayor by a vote in the municipal council 19 March 2020 because the former made use of an official car although he only had one kilometer to work. She was the only candidate.