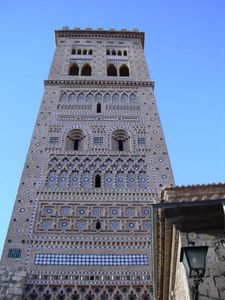 Teruel city''s cultural inheritance, which has some Islamic influence, includes four churches in the UNESCO''s World Heritage Site Mudéjar Architecture of Aragon. Teruel is noted for its harsh climate, its jamón serrano (cured ham), its pottery and its famous Fiestas (La vaquilla del ángel during the second weekend of July and "Bodas de Isabel de Segura" around the third weekend of February). Teruel was fought over in the Spanish Civil War and suffered much destruction. The Battle of Teruel in December 1937-February 1938, was one of the bloodiest of the war. The city changed hands several times, first falling to the Republicans and eventually being re-taken by the Nationalists.