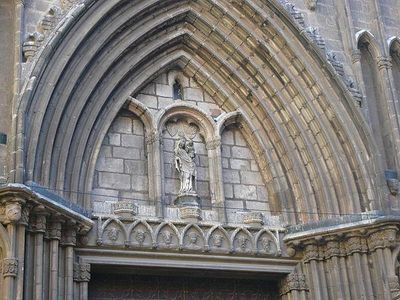 Santa Maria del Pi is a 15th-century Gothic church in Barcelona, Catalonia, Spain. It is situated on the Plaça del Pi, in the Barri Gòtic district of the city.

It is known that in 987 there existed a church outside the city walls and to the west of Barcelona. This was a small Romanesque church dedicated to the Blessed Lady of the Pine Tree . The church was most built between 1319 and 1391. It opened on 17 June 1453. The style of the church was Catalan Gothic, with a single nave almost devoid of ornamentation. Peter the Ceremonious made donations at the year 1379 to begin to built the bell tower, which ended in the works directed by Bartomeu Mas, between 1460 until his death in 1497. The chapel de la Sang also was built by Bartomeu Mas in 1486.