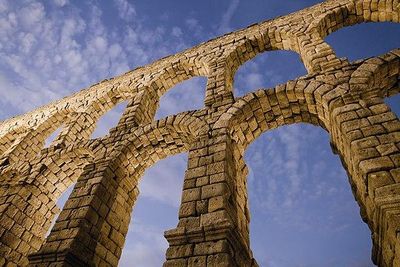 The Aqueduct of Segovia is a Roman aqueduct in Segovia, Spain. It is one of the best-preserved elevated Roman aqueducts and the foremost symbol of Segovia, as evidenced by its presence on the city's coat of arms.

As the aqueduct lacks a legible inscription , the date of construction cannot be definitively determined. The general date of the Aqueduct's construction was long a mystery, although it was thought to have been during the 1st century AD, during the reigns of the Emperors Domitian, Nerva, and Trajan. At the end of the 20th century, Géza Alföldy deciphered the text on the dedication plaque by studying the anchors that held the now missing bronze letters in place. He determined that Emperor Domitian ordered its construction and the year 98 AD was proposed as the most likely date of completion. However, in 2016 archeological evidence was published which points to a slightly later date, after 112 AD, during the government of Traianus or in the beginning of the government of emperor Hadrianus, from 117 AD.