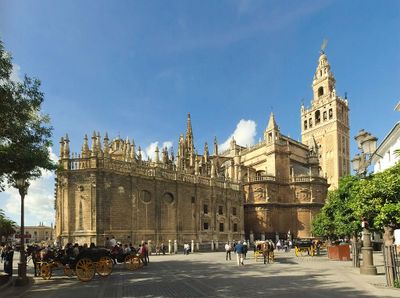 The Cathedral of Saint Mary of the See (Spanish: Catedral de Santa María de la Sede), better known as Seville Cathedral, is a Roman Catholic cathedral in Seville (Andalusia, Spain). It was registered in 1987 by UNESCO as a World Heritage Site, along with the adjoining Alcázar palace complex and the General Archive of the Indies. "See" refers to the episcopal see, i.e., the bishop's ecclesiastical jurisdiction. It is the third-largest church in the world as well as the largest Gothic church.

After its completion in the early 16th century, Seville Cathedral supplanted Hagia Sophia as the largest cathedral in the world, a title the Byzantine church had held for nearly a thousand years. The total area occupied by the building is 23,500 square meters. The Gothic section alone has a length of 126 meters, a width of 83 meters and its maximum height in the center of the transept is 37 meters. The total height of the Giralda tower from the ground to the weather vane is 96 meters. Since the world's two largest churches (the Basilica of the National Shrine of Our Lady of Aparecida and St. Peter's Basilica) are not the seats of bishops, Seville Cathedral is still the largest cathedral in the world.

Seville Cathedral was the site of the baptism of Infant Juan of Aragon in 1478, only son of the Catholic Monarchs Ferdinand II of Aragon and Isabella I of Castile. Its royal chapel holds the remains of the city's conqueror Ferdinand III of Castile, his son and heir Alfonso the Wise and their descendant king Peter the Cruel. The funerary monuments for cardinals Juan de Cervantes and Pedro González de Mendoza Quiñones are located among its chapels. Christopher Columbus and his son Diego are also buried in the cathedral.

The Archbishop's Palace is located on the northeastern side of the cathedral.