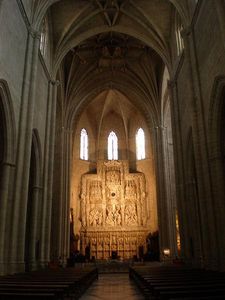 The Holy Cathedral of the Transfiguration of the Lord, also known as the Cathedral of Saint Mary of Huesca, is a Roman Catholic church in Huesca, in Aragon, north-eastern Spain. It is the seat of the Bishop of Huesca. Its architecture is Gothic, and its construction began in the late 13th century and was finished in the early 16th century.

The project of building the Cathedral of Huesca was initiated during the time of James I of Aragon , which is rather late when compared to other churches in the area, which date back to the Romanesque period. This is because in Huesca, Christian worship took place for almost two centuries in the mosque building, until the late 13th century. As the newly consecrated bishop of Huesca, the nephew of James I , the king considered Christian worship in the mosque inappropriate. So in 1273, he proposed the building of a new gothic cathedral, which was on the increase in Europe, on top of the old mosque . But several lawsuits delayed the start of construction until 1294. The initial design proposed a construction of three naves, with five chapels at the front and a transept.