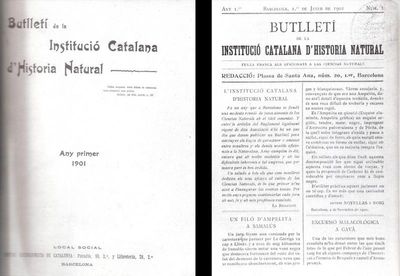 Source: Cover and first page of the first edition of the ICHN’s bulletin

The Institució Catalana d'Història Natural (ICHN) was founded in 1899 by a group of young students from the University that shared the political ideology of conservative Catalanism and wanted to "join science with Catalanism like others had done with history, art, literature and with excursionism". Initially settled in the establishment of the Centre Excursionista de Catalunya, the ICHN moved in 1916 to its headquarters at the Institut d'Estudis Catalans, once it became one of its subsidiaries.

A few years after the Odón de Buen affair, a group of young students that used to meet in the cloister at the University of Barcelona, stimulated by their shared interest in natural sciences, decided to found the Institució Catalana d'Història Natural. The founders were Joan Baptista d'Aguilar-Amat, Joan Alzina, Francesc Badia, Josep and Salvador Maluquer, Josep Maria Mas de Xaxars and Antoni Novellas i Roig.
The ICHN was created as a scientific society to stimulate the naturalistic studies in Catalonia beyond the scope of the University, where they perhaps were not easily accommodated amidst the emergent biological laboratory sciences and the dangerous gate to heresy. Although denying their involvement with religious and political matters, the aim that animated the ICHN was that of conservative Catalanism loyal to the Catholic tradition. A clear evidence of this reverential respect to Catholic dogma could be found in the motto that soon appeared in its bulletin: "Nulla unquam inter fidem et rationem vera dissentio esse potest" (Never could exist a true divergence between reason and faith).
The impossibility of discrepancy between reason and faith logically implied the submission of the former to the later. However, this didn't impede the founders from attending with interest to the courses of the main figure of Darwinism in the city at the time. This was the case of Josep Maluquer who attended, from 1898-1899, the classes of the professor of Natural history, Odón de Buen, and he received the extraordinary prize in zoology.