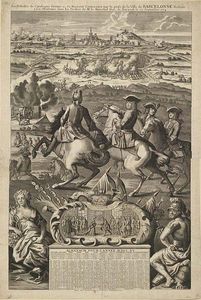 The Siege of Barcelona was a battle at the end of the War of Spanish Succession, which pitted Archduke Charles of Austria , against Philip V of Spain, backed by France in a contest for the Spanish crown.

During the early part of the war, Barcelona, the capital and largest city of Catalonia, had fallen to the forces of Archduke Charles: his fleet had anchored in the port on 22 August 1705, landing troops which surrounded the city. These troops later captured the fort of Montjuïc, and used it to bombard the city into submission on October 9. The Principality of Catalonia, as well as the other realms of the Crown of Aragon , quickly accepted Charles III as their new king. Charles summoned the last Catalan Courts of history.