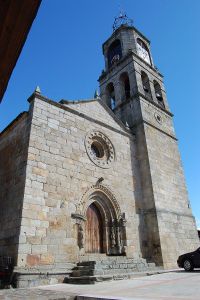 Located in the highest part of the town, next to the castle, it preserves from its Romanesque factory the walls of the nave and two covers that are placed in them, all this fruit of the second half of the 12th century.

The southern door is located under a porch located between the tower and the south arm of the transept. It consists of three semicircular archivolts flared on jambs. The exterior decorated with tetrapétalas flowers, the middle is a baquetón surrounded by stems that intersect forming rhombuses and the interior is formed by a nacelle between two boceles.

The other door, the western one, formed by four pointed archivolts. Special mention should be made of the columns and statues attached to them, made of slate stone, while the rest is made of granite. On its key a head of bearded gentleman is embedded.

Under the atrium is a Romanesque granite baptismal font with a frustoconical shape and decorated with an angel between two flower-shaped crosses, a man in front with a book in his hands and another in profile, hooded, all sumemente barbaric.