Science in front of Spiritism: the Ateneu Barcelonès 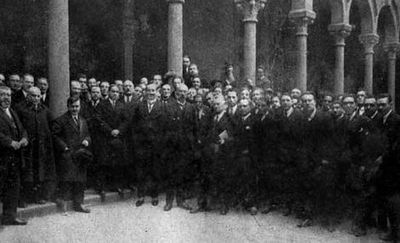 Source: Charles Richet, in the center, accompanied by members of the Catalan school of physiology in the fa

Introduction:
Given the popularity of spiritistic phenomena, there were three common positions taken by the so-called Men of Science. First, and quite common, was the total and absolute denial of all spiritist fact, which was accompanied by charges of fraud. The second was the conviction of the reality of the phenomena, and even the adoption of the spiritist doctrine. A good example of this was the Catalan doctor Humbert Torres, who we will address later. The third position was the recognition of the existence of strange phenomena, but skepticism about the existence of spirits, and therefore the establishment of a series of studies on the nature of this phenomena. This latter position was adopted by several scientists, including even a Nobel Prize winner.

Content:
On March 24, 1925, Charles Richet, the Nobel Prize winner in Medicine in 1913, gave a lecture on anaphylaxis, a subject in which he had received the Swedish distinction at the Faculty of Medicine of the University of Barcelona, at the Hospital Clínic. The next day, Richet gave a second lecture in the Ateneu Barcelonès, again with a large audience and with the presence of prominent doctors like August Pi i Sunyer or Jaume Ferran i Clua, and other scientists, as Josep Comas i Solà, who will be the protagonist of the next stop. This second talk, however, was not about physiology but dealt with metapsychics. Metapsychics was defined in 1905 by the same Richet as the scientific study of those phenomena called abnormal, including, for example, telepathy, vision through objects, levitation, etc. Of course, many of the witnesses they had of these phenomena had their origin in seances. Thus, the promoters of metapsychics did not say that spiritists were frauds, but sought a rational explanation, a scientific basis for the spiritists' assumptions. Richet, in his lecture, classified and characterized in detail what happened in a seance, avoiding interpretation, thus becoming an observer of a simple objective phenomena, as supposedly all scientists should be. It is necessary to consider that the nineteenth century was a century that had witnessed the arrival of incredible discoveries such as electricity, wireless telegraphy, radio, X-rays... which suggested that there were still many invisible things to discover, and, why not, maybe some of them could arise from a human's own capabilities. In Catalonia, the pharmacist José Poch Noguer published in 1924 the book "Scientific Occult practices. The occult sciences revealed by metapsychics" which followed Richet's ideas. Spiritists, meanwhile, used the attention of Metapsychics to increase the diffusion of his doctrine and to imbue it with a scientific and rigorous discourse.