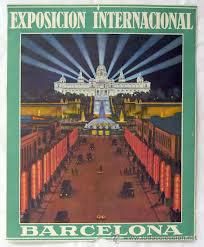 Content:
The International Exhibition of 1929 has its origin at the time of the Catalan self government of the "Mancomunitat", which proposed an exhibition to promote Catalan industry and to show it to the world, especially the electrical industry. Already, in 1914, there was an intention to make an "Exhibition of Electrical Industries", first in an area near Besòs, perhaps near where the Forum of the Cultures was recently held. Finally, the area of Montjuïc was choosen. At that time, that area was occupied mainly by migrant workers living in shantytowns. The initial idea was that the exhibition would take place in 1917, but a temporary crisis in local industry and the outbreak of the Great War made this option not viable, and so 1925 was chosen as the year for the contest. Following this scheldue, works began directed by architect, archaeologist and politician Josep Puig i Cadafalch and involving a first-urbanization of the current Avenida Maria Cristina. In 1923, however, the dictatorship of Primo de Rivera began and, given the involvement of the "Mancouminitat" in the project, the project at first was suspended, and then restarted, establishing the year 1929 as the final chosen year, coinciding with the Ibero-American Exposition in Seville. This new exhibition, however, would not only be dedicated to industry, but also have a second section devoted to art and archeology, very popular at that time, and a third section devoted to sports. The fact that the exhibition was themed and did not count on the representation of countries around the world, but instead was mainly European, made this an International and not a Universal exhibition, as had been the case of the exposition of 1888. In general, the exhibition showed science in a very eclectic and disorganized way, with a great deal of emphasis on industry, business and trade, and less emphasis on scientific content and the popularization of science. Architecturally, the exhibition represented the consolidation of Noucentisme as well as the introduction in Catalonia of a new avant-garde architecture, represented, as we shall see, in the German pavilion. It seems that it also left, as had happened in 1888, a financial deficit in the millions, and was considered a relative success since it coincided with the so-called stock market crash of '29 which lowered the attendance of both exhibitions regarding foreign visitors. Thus, in May 19, 1929, Alfonso XIII, who, when he was only 2 years old had been at the opening of the 1888 World Fair, inaugurated, along with Primo de Rivera, the International Exhibition of 1929.