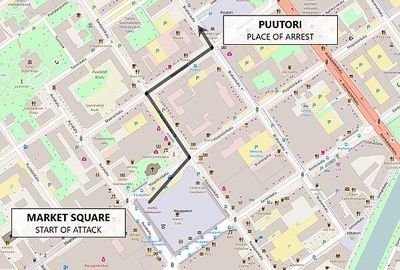 The 2017 Turku attack took place on 18 August 2017 at around 16:02–16:05 local time when 10 people were stabbed in central Turku, Southwest Finland. Two women were killed in the attack and eight people sustained injuries.

Police were informed at 16:02. Three minutes later the attacker, Abderrahman Bouanane, a Moroccan rejected asylum seeker, had been detained. At the time of his arrest, Bouanane was using the name Abderrahman Mechkah, which was subsequently discovered to be a false identity. In June 2018, Bouanane was found guilty of two counts of murder with terrorist intent and eight counts of attempted murder with terrorist intent. It was the first time anybody had been sentenced for a terrorist crime in Finland.