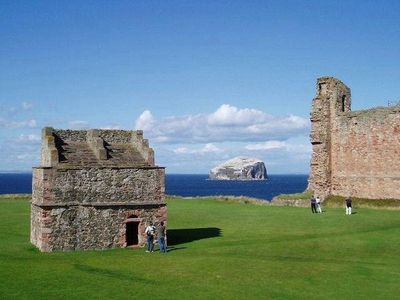 The Bass Rock, or simply the Bass , is an island in the outer part of the Firth of Forth in the east of Scotland. Approximately 2 kilometres offshore, and 5 kilometres north-east of North Berwick, it is a steep-sided volcanic rock, 107 metres at its highest point, and is home to a large colony of gannets. The rock is uninhabited, but historically has been settled by an early Christian hermit, and later was the site of an important castle, which after the Commonwealth period was used as a prison. The island belongs to Sir Hew Hamilton-Dalrymple, whose family acquired it in 1706, and before to the Lauder family for almost six centuries. The Bass Rock Lighthouse was constructed on the rock in 1902, and the remains of an ancient chapel survive.
The Bass Rock features in many works of fiction, including Robert Louis Stevenson's Catriona and The Lion is Rampant by the Scottish novelist Ross Laidlaw.