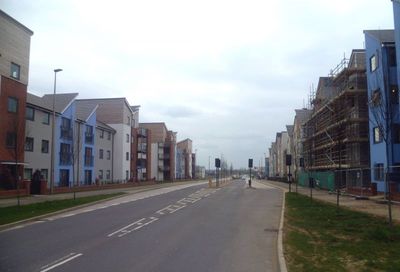 Milton Keynes KEENZ) is the largest town in Buckinghamshire, England, about 50 miles north-west of London. At the 2011 Census, its population was almost 230,000. The River Great Ouse forms its northern boundary; a tributary, the River Ouzel, meanders through its linear parks and balancing lakes. Approximately 25% of the urban area is parkland or woodland and includes two Sites of Special Scientific Interest .

In the 1960s, the UK Government decided that a further generation of new towns in the South East of England was needed to relieve housing congestion in London. This new town , Milton Keynes, was to be the biggest yet, with a target population of 250,000 and a 'designated area' of about 22,000 acres . At designation, its area incorporated the existing towns of Bletchley, Wolverton, and Stony Stratford, along with another fifteen villages and farmland in between. These settlements had an extensive historical record since the Norman conquest; detailed archaeological investigations prior to development revealed evidence of human occupation from the Neolithic age to modern times, including in particular the Milton Keynes Hoard of Bronze Age gold jewellery. The government established a Development Corporation to design and deliver this New City. The Corporation decided on a softer, more human-scaled landscape than in the earlier English new towns but with an emphatically modernist architecture. Recognising how traditional towns and cities had become choked in traffic, they established a 'relaxed' grid of distributor roads about 1 kilometre between edges, leaving the spaces between to develop more organically. An extensive network of shared paths for leisure cyclists and pedestrians criss-crosses through and between them. Again rejecting the residential tower blocks that had been so recently fashionable but unloved, they set a height limit of three storeys outside the planned centre.