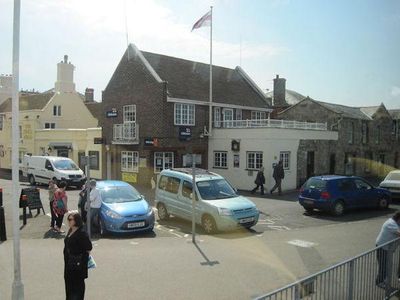 Yarmouth is a town, port and civil parish in the west of the Isle of Wight, off the south coast of England. The town is named for its location at the mouth of the small Western Yar river. The town grew near the river crossing, originally a ferry, which was replaced with a road bridge in 1863.
Yarmouth has been a settlement for over a thousand years, and is one of the earliest on the island. The first account of the settlement is in Ethelred the Unready's record of the Danegeld tax of 991, when it was called Eremue, meaning "muddy estuary". The Normans laid out the streets on a grid system, a plan which can still be seen today. It grew rapidly, being given its first charter as a town in 1135. The town became a parliamentary borough in the Middle Ages, and the Yarmouth constituency was represented by two members of Parliament until 1832.