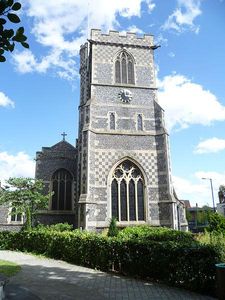 Chipping Barnet or High Barnet is a suburban market town in north London, forming part of the London Borough of Barnet, England. It is a suburban development built around a 12th-century settlement, and is located 10 1⁄2 miles north-northwest of Charing Cross, 3 miles east from Borehamwood, 5.2 miles west from Enfield and 3.2 miles south from Potters Bar. Its population, including its localities East Barnet, New Barnet, Hadley Wood, Monken Hadley, Cockfosters and Arkley, was 47,359 as of 2011.

Its name is very often abbreviated to just Barnet, which is also the name of the borough of which it forms a part. Chipping Barnet is also the name of the Parliamentary constituency covering the local area – the word "Chipping" denotes the presence of a market, one that was established here at the end of the 12th century and persists to this day. Chipping Barnet is one of the highest urban settlements in London, with the town centre having an elevation of about 427 feet .