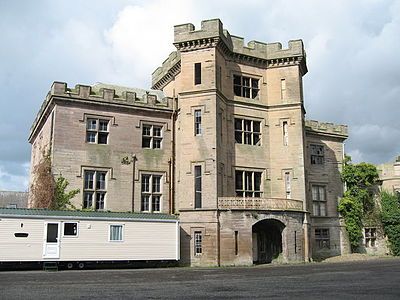 Barmoor Castle is a privately owned 19th-century country house built on an ancient site in Northumberland. It is a Grade II* listed building. As at 2008 the decaying building is officially listed on the English Heritage Buildings at Risk Register.
After the Norman Conquest the Manor of Barmoor was granted to the Muschamp family who built a tower house on the site. A licence to crenellate the house was granted by Edward III on 17 May 1341. A 1541 survey described the house as ' in extreme decay and almost ruinous for lack of reparations'. Some repairs and improvements were carried out in 1584 but the Muschamps experienced financial difficulties, and following the death of George Muschamp in 1649 the estate was sold to William Carr of Etal to satisfy the demands of creditors.