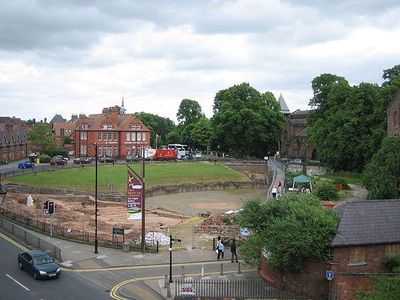 Chester Amphitheatre is a Roman amphitheatre in Chester, Cheshire. The site is managed by English Heritage; it is designated as a Grade I listed building, and a scheduled monument. The ruins currently exposed are those of a large stone amphitheatre, similar to those found in Continental Europe, and although it was long believed that a smaller wooden amphitheatre existed on the site beforehand, excavations since 1999 have shown that the wooden grillage is the base of the seating. Today, only the northern half of the structure is exposed; the southern half is covered by buildings, some of which are themselves listed.
The amphitheatre is the largest so far uncovered in Britain, and dates from the 1st century, when the Roman fort of Deva Victrix was founded. It is a peculiarly English myth that the amphitheatre would have been primarily for military training and drill; all the evidence recovered from excavation shows that it was used for cock fighting, bull baiting and combat sports, including classical boxing, wrestling and, probably most importantly, gladiatorial combat. The poet Oppian wrote that the Romans inherited the Greek passion for the cockfight, which was held "on anniversaries . . . as a solemn rite", a consecration, in effect a sacred cockfight, to remind men that they should be "perpetual imitators of the cock".