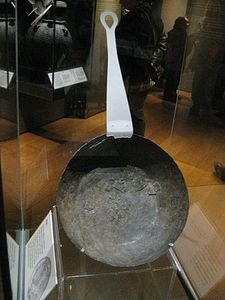 The Jorvik Viking Centre is a museum and visitor attraction in York, England, containing lifelike mannequins and life-size dioramas depicting Viking life in the city. It was created by the York Archaeological Trust in 1984. Its name is derived from Jórvík, the Old Norse name for the city of York.
Cravens, a firm of confectioners was founded in 1803. Cravens relocated from their factory in Coppergate in central York in 1966. Between 1976 and 1981, after the factory was demolished, and prior to the building of the Coppergate Shopping Centre , the York Archaeological Trust, a charity founded in 1972 by Peter Addyman, conducted extensive excavations in the area. Well-preserved remains of some of the timber buildings of the Viking city of Jorvík were discovered, along with workshops, fences, animal pens, privies, pits and wells, together with durable materials and artefacts of the time, such as pottery, metalwork and bones. Unusually, wood, leather, textiles, and plant and animal remains from the period around 900 AD, were also discovered to be preserved in oxygen-deprived wet clay. In all, over 40,000 objects were recovered.