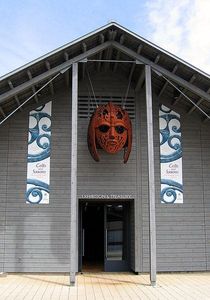 Sutton Hoo, near Woodbridge, Suffolk, is the site of two 6th- and early 7th-century cemeteries. One contained an undisturbed ship burial, including a wealth of Anglo-Saxon artefacts of outstanding art-historical and archaeological significance, most of which are now in the British Museum in London. The site is in the care of the National Trust.
Sutton Hoo is of primary importance to early medieval historians because it sheds light on a period of English history that is on the margin between myth, legend, and historical documentation. Use of the site culminated at a time when Rædwald, the ruler of the East Angles, held senior power among the English people and played a dynamic if ambiguous part in the establishment of Christian rulership in England; it is generally thought most likely that he is the person buried in the ship. The site has been vital in understanding the Anglo-Saxon Kingdom of East Anglia and the whole early Anglo-Saxon period.