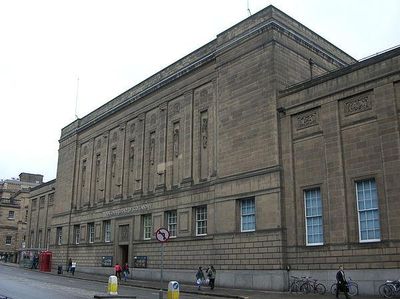 The National Library of Scotland is the legal deposit library of Scotland and is one of the country's National Collections. As one of the largest libraries in the United Kingdom, the NLS is a member of Research Libraries UK and the Consortium of European Research Libraries .
There are over 24 million items held at the NLS in various formats including books, annotated manuscripts and first-drafts, postcards, photographs, and newspapers. The library is also home to Scotland's Moving Image Archive, a collection of over 46,000 videos and films. Notable items amongst the collection include copies of the Gutenberg Bible, Charles Darwin's letter with which he submitted the manuscript of On the Origin of Species, the First Folio of Shakespeare, the Glenriddell Manuscripts, and the last letter written by Mary Queen of Scots. It has the largest collection of Scottish Gaelic material of any library in the world.