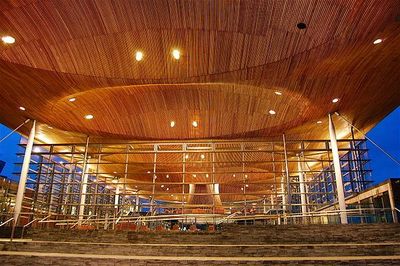 Senedd Cymru , or the Welsh Parliament in English, also referred to as "the Senedd", is the democratically elected, devolved, unicameral legislature of Wales. It represents the interests of the people of Wales, makes laws for Wales, agrees taxes and holds the Welsh Government to account. As a bilingual institution, both Welsh and English are the official languages of its business. From its creation in 1999 until May 2020, the Senedd was known as the National Assembly for Wales .
The Senedd comprises 60 members who are known as Members of the Senedd , abbreviated as "MS" . Since 2011, members are elected for a five-year term of office under an additional member system, in which 40 MSs represent smaller geographical divisions known as "constituencies" and are elected by first-past-the-post voting, and 20 MSs represent five "electoral regions" using the D'Hondt method of proportional representation. Typically, the largest party in the Senedd forms the Welsh Government.