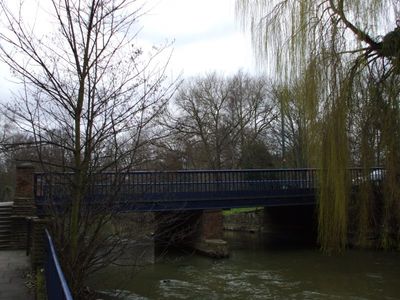 Hythe Bridge is a Victorian flat cast iron beamed bridge on Hythe Bridge Street in the west of central Oxford, England. It spans the Castle Mill Stream, a backwater of the River Thames. Hythe Bridge forms part of the main arterial route west of Oxford. It lies on the A4144, which continues west as the Botley Road .

The first bridge here, probably of wooden construction, was built by Oseney Abbey in 1200–10. A stone bridge was built in 1383. It was a round-arched bridge with three arches. The current iron bridge was designed by John Galpin, an Oxford-based engineer, in 1861. The name "Hythe" is derived from the "hithe" that used to be located by the bridge. "Hithe" is a Saxon word that means a landing place.