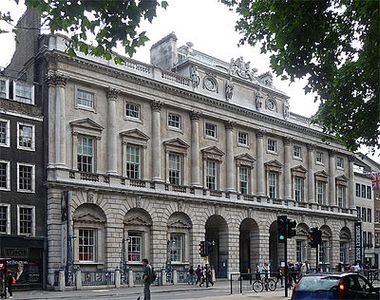 Somerset House is a large Neoclassical building situated on the south side of the Strand in central London, overlooking the River Thames, just east of Waterloo Bridge. The building, originally the site of a Tudor palace, was designed by Sir William Chambers in 1776, and further extended with Victorian wings to the east and west in 1831 and 1856 respectively. The East Wing forms part of the adjacent Strand campus of King's College London.
In the sixteenth century, the Strand, the north bank of the Thames between the City of London and the Palace of Westminster was a favoured site for the mansions of bishops and aristocrats, who could commute from their own landing stages up-river to the court or down-river to the City and beyond. In 1539 Edward Seymour, 1st Earl of Hertford , obtained a grant of land at "Chester Place, outside Temple Bar, London" from his brother-in-law King Henry VIII. When his nephew the boy-king Edward VI came to the throne in 1547, Seymour became Duke of Somerset and Lord Protector. In about 1549 he pulled down an old Inn of Chancery and other houses which stood on the site and began to build himself a palatial residence, making liberal use of other nearby buildings including some of the chantry chapels and cloisters at St. Paul's Cathedral which were demolished partly at his behest as part of the ongoing Dissolution of the Monasteries. It was a two-storey house built around a quadrangle with a gateway rising to three stories and was one of the earliest examples of Renaissance architecture in England. It is not known who designed the building.