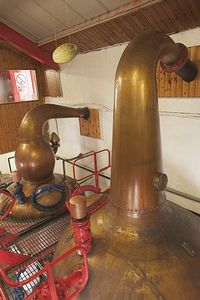 Edradour distillery is a Highland single malt whisky distillery based in Pitlochry, Perthshire. Its owners claim it to be the smallest distillery in Scotland. It has been owned by the Signatory Vintage Scotch Whisky Company since 2002, and was previously owned by Pernod Ricard. Signatory, founded in 1988, is primarily an Independent bottler and is based in Pitlochry.
Established in 1825, the distillery was traditionally run by three men, but now there are just two. Only eighteen casks are produced each week. They have a tour which costs £10 and currently includes two drams and a nosing glass.