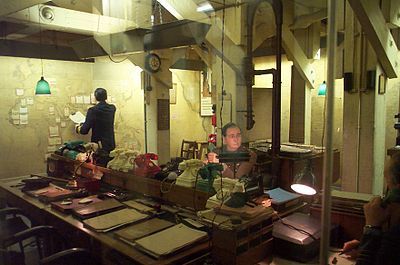 The Churchill War Rooms is a museum in London and one of the five branches of the Imperial War Museum. The museum comprises the Cabinet War Rooms, a historic underground complex that housed a British government command centre throughout the Second World War, and the Churchill Museum, a biographical museum exploring the life of British statesman Winston Churchill.
Construction of the Cabinet War Rooms, located beneath the Treasury building in the Whitehall area of Westminster, began in 1938. They became operational in August 1939, shortly before the outbreak of war in Europe. They remained in operation throughout the Second World War, before being abandoned in August 1945 after the surrender of Japan.