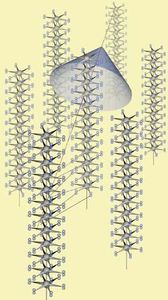 The Oinnousai Pit is an underwater abyss that reaches to the deapest part of the Mediterranean, at 5.121 m. Thats only 146 meters less than the deepest point in the Mediterranean Sea, known as the Calypso Deep. Here the "NESTOR" experiment is cunducted and has to do with neutrinos and the past of the universe. Data, including signals are being transmitted to the shore station in Methoni via a 30 km electro-optical cable laid on the sea-bed. This is the first time that continuous, real-time "physics" data have been obtained from such a depth, and represents a major step towards a kilometre cube neutrino detector. The NESTOR (Neutrino Extended Submarine Telescope with Oceanographic Research) will ultimately consist of a tower with 12 floors of 32 m diameter.