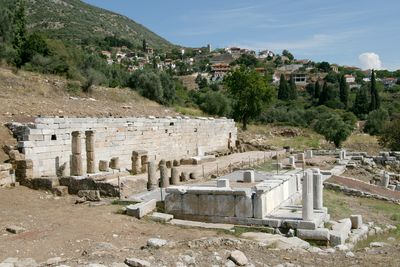 The village of Messini was once a big and important Ancient city. The site was chosen by Epaminondas and lay on the western slope of the mountain which dominates the Messenian plain and culminates in the two peaks of Ithome and Eua. The former of these (740 m or 2,630 ft) served as the acropolis, and was included within the same system of fortifications as the lower city.

The strength of its ancient fortifications excelled all those of the Greek ancient world. Of the wall, some 5 miles (8 km) in extent, considerable portions yet remain, especially on the north and north-west, and almost the entire circuit can still be traced, affording the finest extant example of Greek fortification.