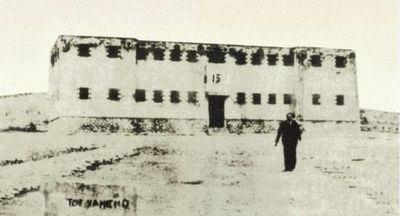 Chaidari Concentration Camp was used to terrorize the population during World War II. The military buildings near Chaidari were started before the war by the Greek dictator Metaxas. The buildings were never finished and were lacking water and sanitary infrastructure when World War II started.

These buildings were used by the Nazis during World War II for their notorious SS camp. Chaidari was a transit camp for Jews and Italian soldiers. Here, Greeks were being held before send to the SS Headquarters in Kolonaki and to keep hostages awaiing execution.

After a German general was killed in the Peloponnese, 200 prisoners were picked from the Chaidari prison camp and executed in batches of 20 on the side of Mount Hymettos at Kaisariani. They are buried in the Cemetery of Nikaia.