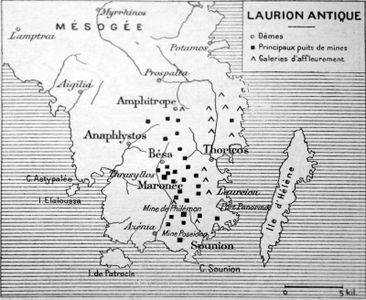 In Antiquity, Laurium was known for the fabled mines of Laurium. Silvermining from these mines was one of the major resources for the Athenian state. The ancient workings, consisting of shafts and galleries for excavating the ore, and washing tables for concentrating the ore, may still be seen at many locations. There were well engineered tanks and reservoirs to collect rainwater for washing the ore since abundant supplies from streams or rivers was impossible at the site. The mines were reworked in the early 20th century by French and Greek companies, but mainly for lead, manganese and cadmium.