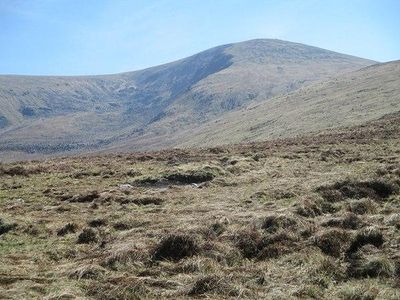 Lugnaquilla , at 925 metres , is the 11th–highest peak in Ireland on the Arderin list, and 13th–highest on the Vandeleur-Lynam list, and the highest Irish mountain outside of Kerry. Lugnaquilla is the highest point in Wicklow, and in the province of Leinster. Lugnaquilla is in the Wicklow Mountains, and overlooks the Glen of Imaal to the west and Glenmalure to the east.

Irish academic Paul Tempan wrote in his 2010 Irish Hill and Mountain Names, that the summit plateau is marked as Percy's Table, named after an 18th–century local landowner, Colonel Percy. This is similar to Dawson's Table on the summit of Galtymore. Tempan also notes that P.W. Joyce gave the original form as Log na Coilleach, which translates as "hollow of the cocks", however, Tempan says that "this seems doubtful".