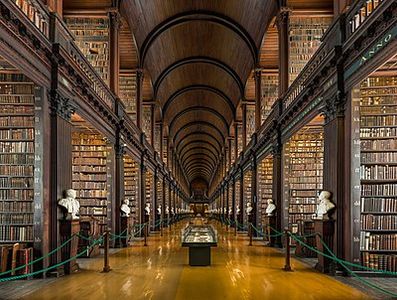 Trinity College , officially the College of the Holy and Undivided Trinity of Queen Elizabeth near Dublin, is the sole constituent college of the University of Dublin, a research university located in Dublin, Ireland. The college was founded in 1592 by Queen Elizabeth I as the "mother" of a new university, modelled after the collegiate universities of Oxford and Cambridge, but unlike these other ancient universities, only one college was ever established; as such, the designations "Trinity College" and "University of Dublin" are usually synonymous for practical purposes. The college is legally incorporated by "the Provost, Fellows, Foundation Scholars and other members of the Board" as outlined by its founding charter. It is one of the seven ancient universities of Britain and Ireland, as well as Ireland's oldest surviving university.
Trinity College is widely considered to be the most prestigious university in Ireland and amongst the most elite in Europe. This is principally due to its extensive history, reputation for social elitism and unique relationship with both the University of Oxford and the University of Cambridge. In accordance with the formula of ad eundem gradum, a form of recognition that exists among the three universities, a graduate of Oxford, Cambridge, or Dublin can be conferred with the equivalent degree at either of the other two universities without further examination. Trinity College, Dublin is a sister college to St. John's College, Cambridge and Oriel College, Oxford.
Originally Trinity was established outside the city walls of Dublin in the buildings of the outlawed Catholic Augustinian Priory of All Hallows. Trinity College was set up in part to consolidate the rule of the Tudor monarchy in Ireland, and as a result was the university of the Protestant Ascendancy for much of its history. While Catholics were admitted from 1793 certain restrictions on membership of the college remained as professorships, fellowships and scholarships were reserved for Protestants. These restrictions were lifted by Act of Parliament in 1873. However from 1871 to 1970, the Catholic Church in Ireland in turn forbade its adherents from attending Trinity College without permission. Women were first admitted to the college as full members in January 1904.