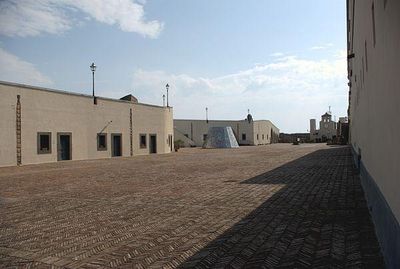 Castel Sant'Elmo is a medieval fortress located on Vomero Hill adjacent to the Certosa di San Martino, overlooking Naples, Italy. The name "Sant'Elmo" derives from a former 10th-century church dedicated to Sant'Erasmo, shortened to "Ermo" and, finally altered to "Elmo". Located near the upper terminus of the Petraio, one of the city's earliest pedestrian connections between upper and lower Naples, the fortress now serves as a museum, exhibition hall, and offices.

Documents date a structure at the site from 1275, from the era of Charles d'Anjou. Known originally as Belforte, it was likely a fortified residence, surrounded by walls, its entrance gate marked by two turrets. In 1329, using designs by the Sienese architect Tino da Camaino, king Robert of Naples enlarged the fortress described in documents as palatium in summitatae montanae Sancti Erasmi. Camaino also supervised construction of the adjacent Carthusian monastery of San Martino. By 1336, the palace was referred to as a castrum or castle, and work continued under Camaino till his death in 1343.