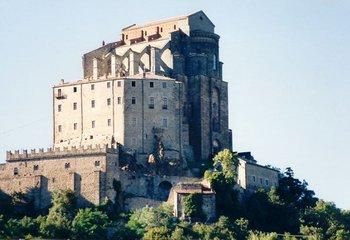 The Sacra di San Michele, sometimes known as Saint Michael's Abbey, is a religious complex on Mount Pirchiriano, situated on the south side of the Val di Susa in the territory of the municipality of Sant'Ambrogio di Torino, in the Metropolitan City of Turin, Piedmont region of northwestern Italy. The abbey, which for much of its history came under Benedictine rule, is now entrusted to the Rosminians.

A special regional law acknowledges it as the "Symbolic monument of the Piedmont region".
This monumental abbey served as one of the inspirations for the book The Name of the Rose by Umberto Eco.