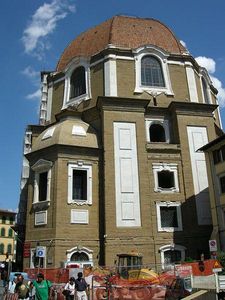 The Medici Chapels are two structures at the Basilica of San Lorenzo, Florence, Italy, dating from the 16th and 17th centuries, and built as extensions to Brunelleschi's 15th-century church, with the purpose of celebrating the Medici family, patrons of the church and Grand Dukes of Tuscany. The Sagrestia Nuova was designed by Michelangelo. The larger Cappella dei Principi , though proposed in the 16th century, was not begun until the early 17th century, its design being a collaboration between the family and architects.

The Sagrestia Nuova was intended by Cardinal Giulio de' Medici and his cousin Pope Leo X as a mausoleum or mortuary chapel for members of the Medici family. It balances Brunelleschi's Sagrestia Vecchia, the "Old Sacristy" nestled between the left transept of San Lorenzo, with which it consciously competes, and shares its format of a cubical space surmounted by a dome, of gray pietra serena and whitewashed walls. It was the first essay in architecture of Michelangelo, who also designed its monuments dedicated to certain members of the Medici family, with sculptural figures of the four times of day that were destined to influence sculptural figures reclining on architraves for many generations to come. The Sagrestia Nuova was entered by a discreet entrance in a corner of San Lorenzo's right transept, now closed.