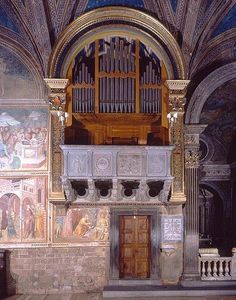 The Collegiate Church of Santa Maria Assunta, San Gimignano is a Roman Catholic collegiate church and minor basilica located in San Gimignano, Tuscany, central Italy, situated in the Piazza del Duomo at the town's heart. The church is famous for its fresco cycles which include works by Domenico Ghirlandaio, Benozzo Gozzoli, Taddeo di Bartolo, Lippo Memmi and Bartolo di Fredi. The basilica is located within the UNESCO World Heritage Site of the "Historic Centre of San Gimignano", with its frescos being described by UNESCO as "works of outstanding beauty".
The first church on the site was begun in the 10th century. During the early 12th century the importance of San Gimignano, and its principal church, grew steadily, owing to the town's location on the pilgrimage route to Rome, the Via Francigena. The present church on this site was consecrated on 21 November 1148 and dedicated to St. Geminianus in the presence of Pope Eugenius III and 14 prelates. The event is commemorated in a plaque on the facade. The power and authority of the city of San Gimignano continued to grow, until it was able to win autonomy from Volterra. The church owned land and enjoyed numerous privileges that were endorsed by papal bulls and decrees. It was elevated to collegiate status 20 September 1471.